About Hiking with Shawn

To promote the originality and uniqueness of the Southern Illinois region and its local businesses, organizations, and events through the endorsement of outdoor recreational activities within the Shawnee National Forest and regional state parks. 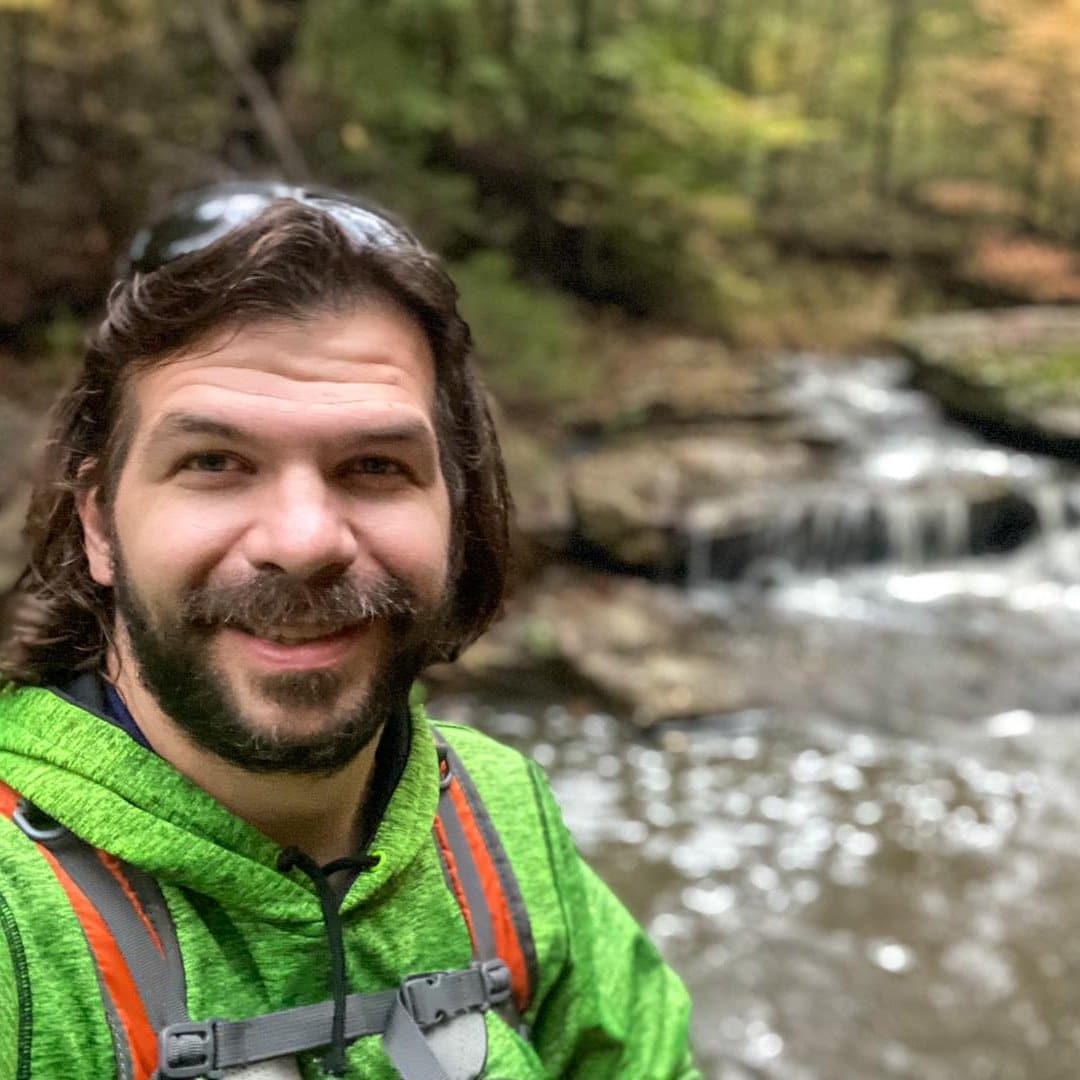 Howdy folks! My name is Shawn Gossman and I am the founder and owner of Hiking with Shawn. I founded Hiking with Shawn on December 12, 2016. I started the channel for fun and little did I know that it would turn into what it has today. Now I get the chance to help southern Illinois and promote the Shawnee National Forest. Hiking with Shawn has truly made my life better!

How You Can Support Me

For financial support, please consider Shopping on My Online Store and Becoming a Monthly Patreon of Hiking with Shawn.

Thank you for supporting Hiking with Shawn! It really means a lot to me!

What’s the full story behind the creation of Hiking with Shawn?

In 2012, I realized I was out of shape, overweight, and going down a very dark road. I was cold back then, hateful, angry, and depressed. I was ignoring health problems that would had likely led me to death at an early age. I smoked cigarettes, drank a lot of alcohol, and ate mainly fast food. I recognized that I needed to change and started trying to work out in the gym to get fit. I hated it. As a last resort to save myself, I bought a bicycle as suggested by my good friend, Steve. Thanks Steve! I rode 20-miles with my mom at Tunnel Hill State Trail the first ride and fell in love with cycling like I did as a kid. Thanks Mom! I started riding pretty much every day. I eventually bought a road bike and really increased my mileage. But I was riding so much that I was burning myself out. I started slipping back to my old ways and not riding as much.

One day while biking at Tunnel Hill. I decided to go see what Heron Ponds was. I always assumed it was for fishing and I’m not really into fishing that much. I rode to it, discovered it was a hiking trail, and decided to hike it. I then fell in love with hiking! I started hiking more and using it to balance my cycling addition. It worked! With the two, I was able to remain active without burning out. I would bring my camera and take photos of my hikes and share them on social media. Someone suggested I make a video for YouTube. I did with the assumption in mind that only people who knew me would watch my videos. I started getting subscribers that I didn’t know but were local. Then I got an email from a women who said she used to live where the Garden of the Gods area was and had forgotten all her childhood memories until she saw my video. That changed everything for me – it was that moment when I took Hiking with Shawn serious and started investing more into it.

I decided to do two things that would motivate me to really put a lot into Hiking with Shawn. I registered it as a LLC and treat it like a business and I registered the national trademark for Hiking with Shawn. I also upgraded my video camera equipment (numerous times) and hiked more areas. I mainly just hiked state parks and Cache River area at first. Then I found Bell Smith Springs and fell in love with the Shawnee National Forest. I started visiting every trail I could find in the forest mainly thanks to the guides by James Baughn and Uncle Bob Tyson. Both of these men have since passed away and I regretfully never got a chance to hike with them. The more I hiked and biked, the better my health became. I eventually quit smoking, quit drinking until I was drunk, and started eating better.

While my life was getting better, due to some dental problems I’ve had most of my life, I decided I was going to remain single and alone for the remainder of my life. I even kept that promise to myself after I got my teeth fixed. I was just so used to being alone. But I was depressed about it and I kept that to myself. Then one day I passed a car on Muddy Levee Road and saw they had my sticker on their window! I found out it was a fan named, Michelle. I eventually met her on Snake Road. Then we started hiking with one another as friends. And the planets and stars aligned and I fell in love with her and she fell in love with me. We are a couple as you probably know that by now. We live together and I don’t want anyone but her. She really completed a huge void in my life.

Is Hiking with Shawn a Business? Are their commercial activities going on?

Yes, No, and somewhere in between… Let me explain it more!

I started treating Hiking with Shawn as a business early during its creation. My intent was to motivate myself to make the brand better. However, there are some intended business and commercial missions included. For the most part, most products of hiking with Shawn are free. This includes my videos, social media activities, blog posts, trail guides, photo displays online, and community guided hikes. I even give my stickers away for free.

However, I do have an online store where I sell Hiking with Shawn branded items such as apparel, stickers, and Shawnee themed postcards (approved by FS guidelines).

I also provide paid guided hiking services as a permitted and insured hiking guide. I also provide Itinerary Planning Services for visitors from out of the region.

I do not put ads on my National Forest or state park videos to comply with commercial use permits. I do run ads on videos filmed on my property, other property where I have been granted permission to, and on National Park videos as low-impact commercial filming can be done without a permit (National Park Service confirmed this with me). The current permit costs for National Forest and state public lands to run a simple video ad is so overpriced that you’d spend more than you’d profit from. They discriminate against small business to be blunt! The policies are outdated and should be changed. My videos are low impact. But nevertheless, I follow the rules.

I offer public speaking for a fee whether in person or virtual. I am also an outdoor writer and offer that as a paid service.

Does Hiking with Shawn use a drone? What camera equipment is used?

Hiking with Shawn does not use a drone or Unmanned Aerial System (UAS). There are too many laws around it and safety concerns. I respect those who do it the right way. But at this time, It isn’t for me or this brand.

I primarily use GoPro as my video camera. I use the GoPro Hero 10, 9, and 8. I use a Sony FDR AX-700 video camera for Snake Road videos – it allows me to zoom without having to get too close to wildlife. I use my phone (iPhone 11) quite often for short videos and photos. I also have a Nikon D7200 SLR that I need to use more.

I use RODE brand external microphones.

I edit video with VEGAS PRO and photos with Adobe Photoshop and Lightroom.

Does Hiking with Shawn support conservation and ethical use of nature?

Yes, I do. I try to respect conservation efforts by respecting rules on the area I am hiking in. I stay on the trail in nature preserves for example and promote staying on trail. I tread lightly when off trail in areas where it isn’t prohibited. I do not share exact locations of rare plants, wildlife, or Native American unknown sites. I do believe everyone has a right to their public lands and keeping areas secret for selfish gains is something I do not and will never support. If an area shouldn’t have the public in it, then it should be public land. Allowing some and not all is an example of American discrimination and I feel we really need to get away from that as a country, as a world, as a society of people.

I pick up trash that isn’t my own including needles, used TP, diapers, and used condoms.

I serve on multiple boards including Friends of the Shawnee National Forest, Friends of the Cache River Watershed, Southernmost Illinois Tourism, and River to River Trail Society. I am the founder and president of Friends of the Tunnel Hill State Trail.

I support prescribed burns and selective resource extraction. I do not support clear cutting on public land. I do not support hiring out of state contractors to extract and sell forest resources to another state. I support Illinois, particularly southern Illinois business.

I’m an advocate of wildlife including the protection of all snakes.

Does Hiking with Shawn support the Public Land Management Agencies?

Yes. I support the agencies, and their people, but I am against political reasoning behind not giving these agencies proper funding and personnel. More needs to be done to protect public lands.

In fact, in early 2021, particular after a hard hit on local businesses from COVID, I changed the mission of my organization as whole to support local first and support tourism second.

I support local for the most part at no cost.

I’m a local business, too!

How can I ask more questions about Hiking with Shawn?

Copyright © 2022 Hiking with Shawn™ All Rights Are Reserved.

Hiking with Shawn is not affiliate with any local, state, or federal government agency.