A Cabin, Llamas and WATERFALLS GALORE! 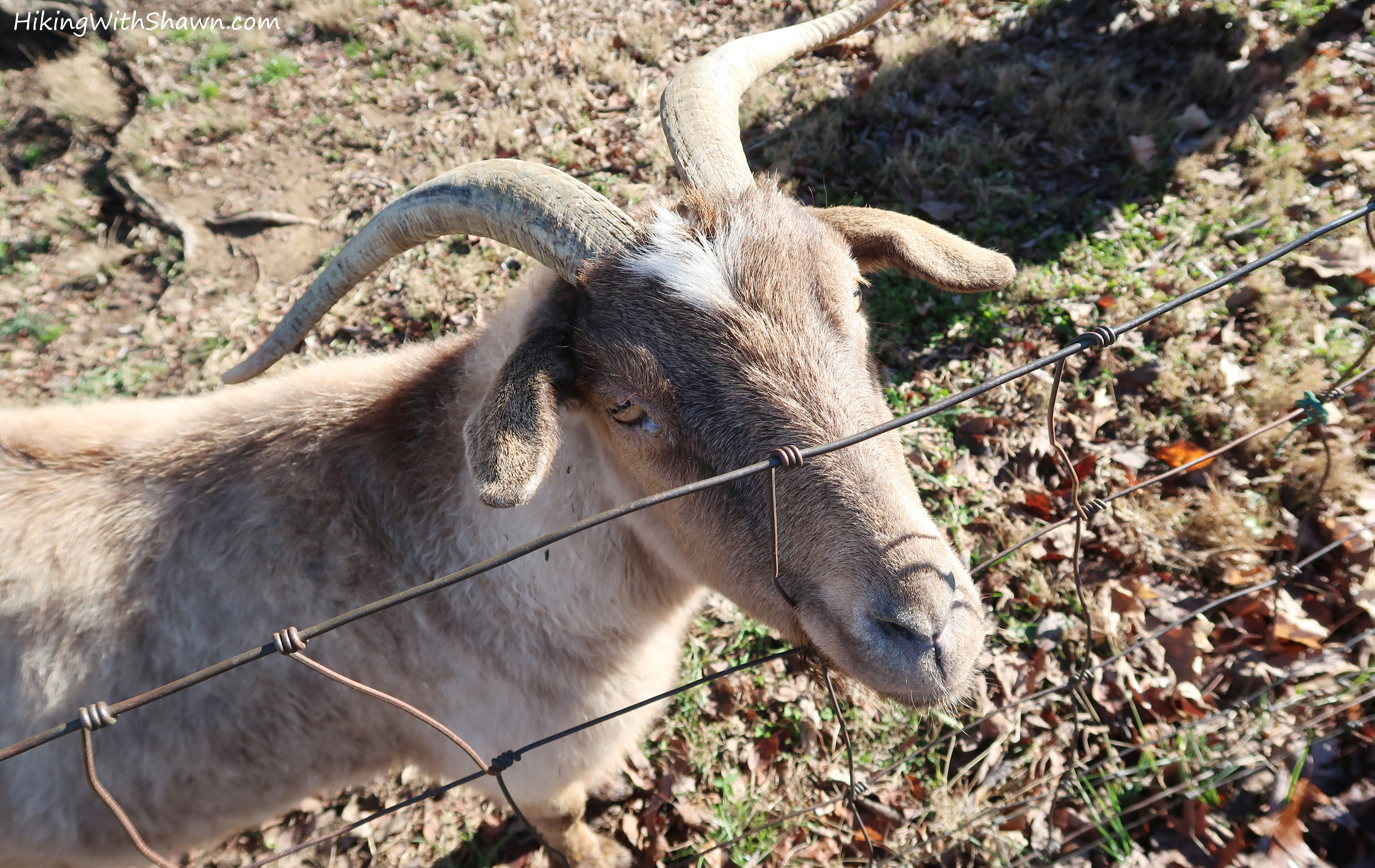 Photo Courtesy of Hiking with Shawn

The title of this write-up is catchy and funny but I feel like you need a backstory before we really get into it. I just recently started a relationship and after many years being single. I wanted to take my girlfriend somewhere special so I rented a cabin for two nights of romantic cabin camping and the hiking we could handle. This is our story…

So… I’ve never actually had the opportunity to stay in a cabin before. It was just something I never really thought about trying out. What had initially caught my attention about Rim Rock’s Dogwood Cabins was several months beforehand, before I even started a relationship with my now girlfriend, I was browsing Facebook and discovered that a local Shawnee National Forest cabin outfitter was promoting their services on their page. I try to like all pages and places of business that relates to the forest. The had mentioned the word ‘BLUFFAGE’ on their page. If you don’t know, I made up the word ‘BLUFFAGE’ as an alternative to Bluffs and the word caught on and many people use it – which just tickles me to death! So when I saw this cabin outfitter using it, I was thrilled!

So fast-forward a few months. I met this awesome girl, we hit off and started dating. We both needed a nice long break and I rented I wanted to be as romantic as possible. So I remembered that cabin service that said bluffage in their post. Next thing up, I took some vacation and rented a cabin for two days. The cabin outfitter “hooked me up” if you will really let me know that they were fans of Hiking with Shawn. I got to say this about them, too. They are from out of state and happened to pass by and see the cabin property for sale. They bought it started up a local business that has made a lot of folks very happy. Kudos to them for doing that, helping to make southern Illinois and Shawnee Forest Country even better for those of us locals and tourists alike who visit when we can.

So I didn’t really browse the cabin rental website enough to know everything about the place. Once I arrived to the property to check in, I noticed a sign that said “Llama Crossing” and then as I turned to my right, there is stood, a full grown Llama, standing up high, still and just staring at me. I stopped the truck and stared back. We probably both stared at one and other for a couple of minutes. I don’t often see llamas so it was fascinating for me. They’re such a goofy looking animal but I say that kindly, not to make fun of them.

After a good old fashion llama stare-down, I made it to my cabin. It was the Doghouse Cabin. It was awesome. Warm, cozy and stocked full of everything I needed. You buy your own food, drinks, personal items, etc. But blankets, sheets, pillows, towels, kitchenware, DVDs, board games, high-speed internet, smart TVs, Dish channels and maps/area brochures – all included. It was like the little house that I really needed to call my own! Pet friendly, too and as far as I could tell, no extra charge for your fury friends which is pretty cool thing for us pet owners. I have a cat, she did not come with me.

I met the owner of the place the next day. He offered me food to give to the llamas. I met the llamas and they were super friendly, goofy looking as all get out but pretty much big pets. They didn’t spit in my face. They didn’t try to eat my clothes. They just approached as friendly as they could be – of course assuming we had food, haha. Llamas aren’t the only thing there, either. They have a few donkeys, goats, chickens and other birds. They have friendly dogs as well. You can pet and feed all these critters, too, super nice creatures. My girlfriend can attest to this – I pretty much carried on a full audible conversation with one of the goats, LOL.

Now the awesome thing about Rim Rock’s Dogwood Cabins is that they are located right on Karbers Ridge Road near Sparkshill Road a bit past the High Knob area. They are practically (I mean maybe 1-2 minutes) from Rim Rock – like close enough that you could actually walk there. And about 5-10 minutes drive from there to Garden of the Gods. What a location!

Not a chance… The trip was far from ruined! Sure, it was super wet outside and kind of chilly but it was December after all. My girlfriend and I decided to hit up Garden of the Gods on day 2 of our cabin trip. It was so close to us that we both understood that we could stay there all the way until it started to turn dark and have a quick ride back to a nice warm cabin. 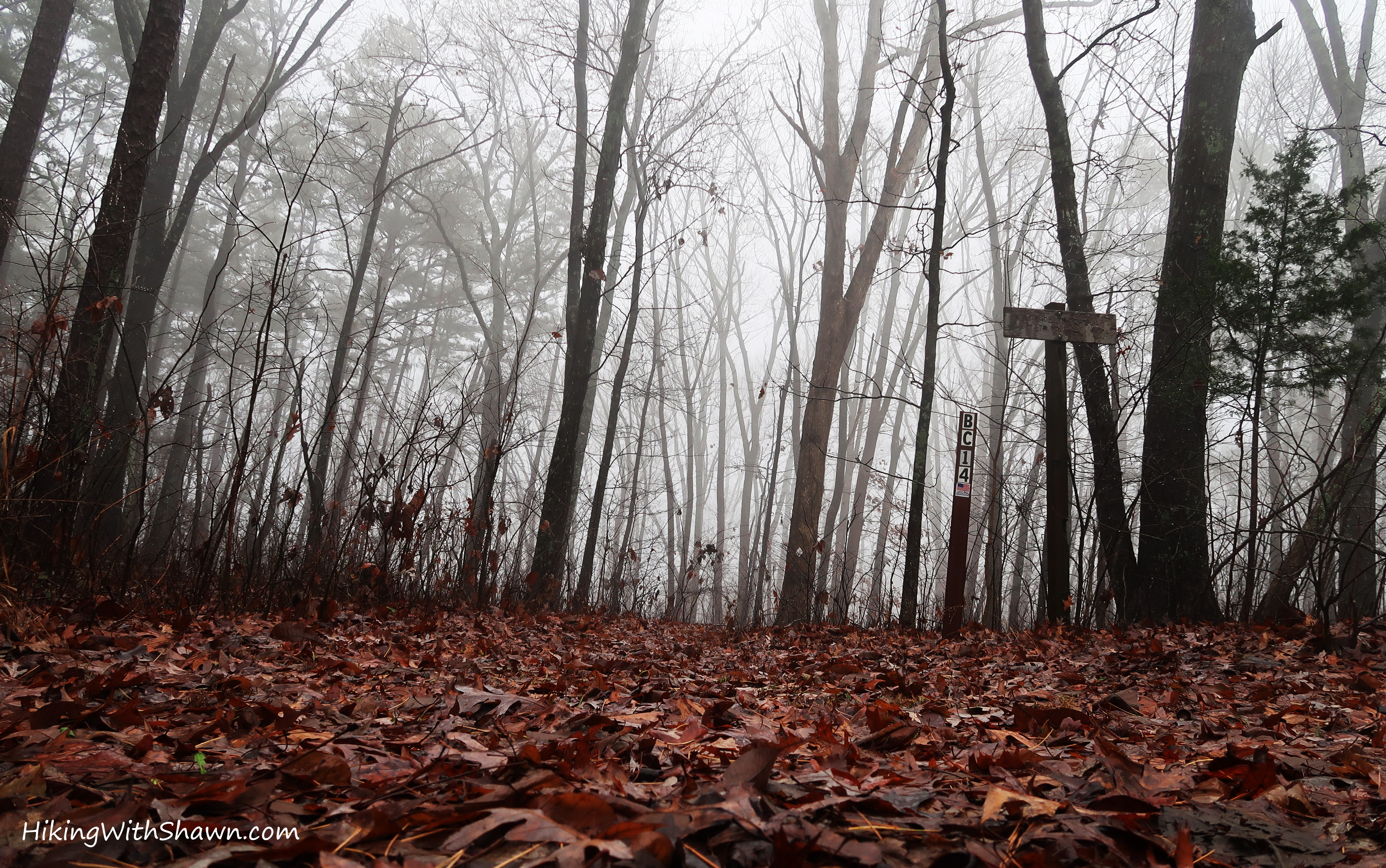 Our first stop was a drive through the foggy Pharaoh Campground to see the beauty of what fog, bluffage and a forest environment looks like when they are all mixed up together. I got so many amazing pictures of that area when it was foggy – I loved every minute of it.

Since tourist traffic was light for a change, we decided to walk the Observation Trail to check out how cool it looked with all the fog. It was a wet walk and chilly but seeing Camel Rock surrounded by a cloud of fog was probably the best scene of it that I’ve ever seen! 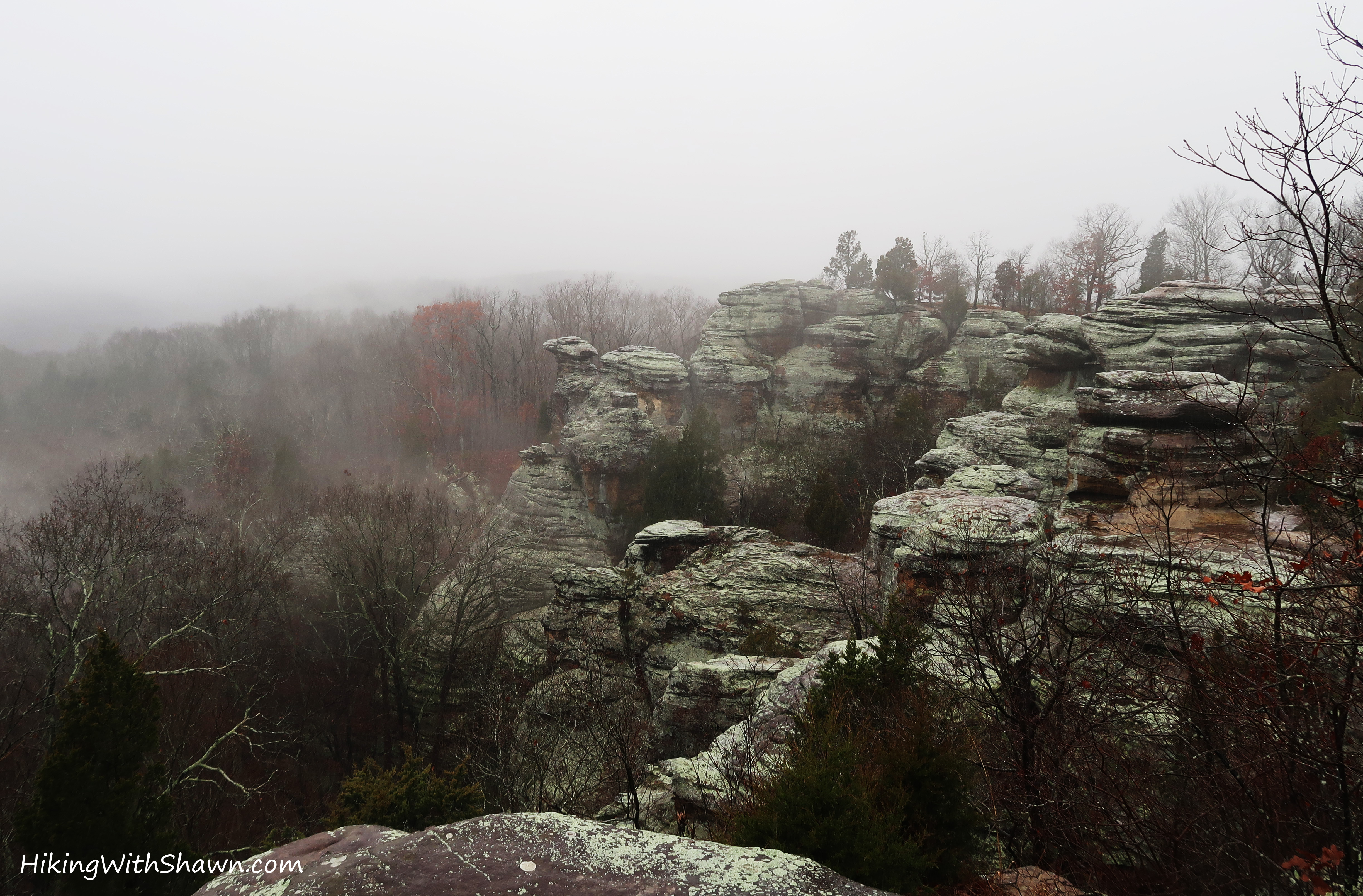 Because of the rain, we almost decided to just go for a scenic drive of the area. But you all know me too well, I’m Hiking with Shawn and I like to hike. I knew there were 2 or 3 spots in the wilderness area of Garden of the Gods that had potential for some waterfall activity so we decided to go check it out. I’m so glad we did. Folks, I can’t count the number of waterfalls we saw on that trip. They were everywhere. I rate it just as good, if not better, than Bulge Hole. I’m completely serious. You visit Garden of the Gods Wilderness on a really wet day and I promise it will be nothing but waterfalls all around you. Just follow the creeks and you’ll get nothing but falling water. It is one of my top 3 hiking trips that I have ever made. No joke. And the chance to share it with the awesome girl I am madly in love with made it perfect.

Watch the Videos for more information

I just want to note that Rim Rock’s Dogwood Cabins was my own choice. This article isn’t sponsored in any way by anyone. I felt that my experience there was so great that I wanted to support their cabin rental outfitter. I know I’ll be returning there again in the future. But a note to cabin outfitters – I welcome an opportunity to stay at your cabins, haha, and I’ll even make a video review of my stay. Get a hold of me if you’re interested.