Nestled deep within the Shawnee National Forest’s Lusk Creek Wilderness is a unique natural area known as Indian Kitchen. Hiking Indian Kitchen is a gem to local and tourists alike. Natural Areas are managed and maintained by the Illinois Department of Natural Resources but many of them are located within US Forest Service lands, much like that of Indian Kitchen. This blog post was created to share the experience that I had hiking Indian Kitchen on a melting winter day with fellow YouTube Channel, Two Bobs Adventures. I hope you enjoy reading this blog post and seeing the pictures and videos below.

From Route 145 in Eddyville, head east onto Eddyville Blacktop (the road just south of Shawnee Mart). Look for the directional sign for Indian Kitchen TH and turn left. Continue on the road until you come to the trailhead parking lot on your left. Trail begins across the road.

Hiking Indian Kitchen: This trail is awesome but even more awesome in the winter!!!

As I always do, I woke up last Saturday morning with no plan for my hiking adventure that day! My hiking videos usually start with me getting into my truck, not knowing where I will be going and just heading south towards the forest. Then while I drive, an idea of where to go hits me. This is truly what usually happens…unless I collaborate! If I plan to do a collaboration, I plan things out a bit and have an idea of where I am going before I leave my driveway.

Today I left with a plan, a plan to go to Indian Kitchen and hike with the folks from Two Bobs Adventures. This was my second collaboration with them and thus far, they are some of my favorite people to hike with.

So I noticed that Bob Sr. had left me a message about checking out Indian Kitchen in the Lusk Creek Wilderness Area. He was an hour away and I was an hour away, so it was the perfect spot to go check out. I hadn’t been there since the summer of last year. That day was a muddy day to say the least. So since it had been a while, I wanted to go back to the place and check it out, again. I hopped in my truck and sped off into the sunset, not really, it was mostly cloudy but a lot warmer than it had been in recent days.

The roads were fairly clear from out recent snow and ice events the past week, at least until I got to Indian Kitchen Road. That road is rural and doesn’t have that much infrastructure on it besides a few houses and the forest so I didn’t expect it to be as maintained as everything else. Luckily activating my truck’s 4×4 was all I needed to scoot my way to the trailhead. Shortly after I arrived, so did Bob, Bob and Bob’s wife or Bob’s mom or both or, you get the picture. Two Bobs, father and son and Francie, the mom of one Bob and the wife of the other Bob… Are you confused?

So Eddyville, which is pretty much where Indian Kitchen starts at must have got more of the snow of the recent winter storm than we did in Williamson County. We got mostly sleet and freezing rain with bits of snow on top. Eddyville and the forest seemed to have more fluffy snow, like the kind I enjoyed as a kid. I need to move into the forest areas, apparently!

But back to the hike…

The better part of the hike was a simple walk in the woods. The trail was wet in many spots and I’m sure all of us had wet feet at some point, I know I did, I can’t keep from getting wet feet. Just ask ZZ Outdoors, lol. Even with the leaf litter and the snow, the trail was very easy to follow to the natural area of Indian Kitchen. But for those of you who have hiked it, consider this, some folks carry their kayaks all the way down that trail to launch them in Lusk when they reach the bottom of the natural area – CRAZY HUH?!

While I took a lot of good video, at least of the best parts, most of my time spent out there was away from the camera and chit-chatting with the guys and gal. When I hike with others, I try to be as social as I can because it breaks the norm of walking around by yourself and talking to something in your hand, haha. But never fear, I got a lot of great footage that turned into a wonderful hiking video! I am Hiking with Shawn after all, right?

After some great talks, hopping around to avoid most of the water and slush, we finally made it to the open area before you start making your way down to the canyon area. There are plenty of spots to tie off a horse for those of you riders who have never went out there but would like to visit. Just take note that the natural area is for Foot Traffic Only but that is a good thing because it seems like horses would have a very hard time getting down there especially in the snow.

The walk down into the natural area was the best. The sights kept getting better and better with vistas from the edges of snow covered bluffage to huge icicles hanging off the ancient rocks that surround the area. We, well me Bob and Bob, got fairly close to the edge – boys being boys I guess, but I noticed Bob’s mom and/or Bob’s wife was watching her two very close, like any good mom/wife should do! But we kept it safe because folks, the bluffage is awesome but the bluffage is dangerous, too! So tread carefully, especially when getting close to the edge!!

When we finally made it to the bottom where the creek is, the day went from pretty cool to spectacular…

Folks… There are barely any words that I can muster up to explain the image above. Being around the bluffage has always mesmerized me and made me feel oh so young in front of these ancient Gods of rock and age but to see one covered in that ice was truly an experience one would never forget. And many will shrug it off as nothing really. Maybe I am just a poetic thinker when I get into the wilderness areas. It just makes me feel so alive to see it!

We spent a while down in the canyon taking selfies and enjoying the views until finally decided to turn back and head back towards the trailhead. But we weren’t done hiking yet by any means. We decided to take an off-shoot trail not listed on the map, to go visit a cemetery that has a special place in my heart for reasons that I will explain below… 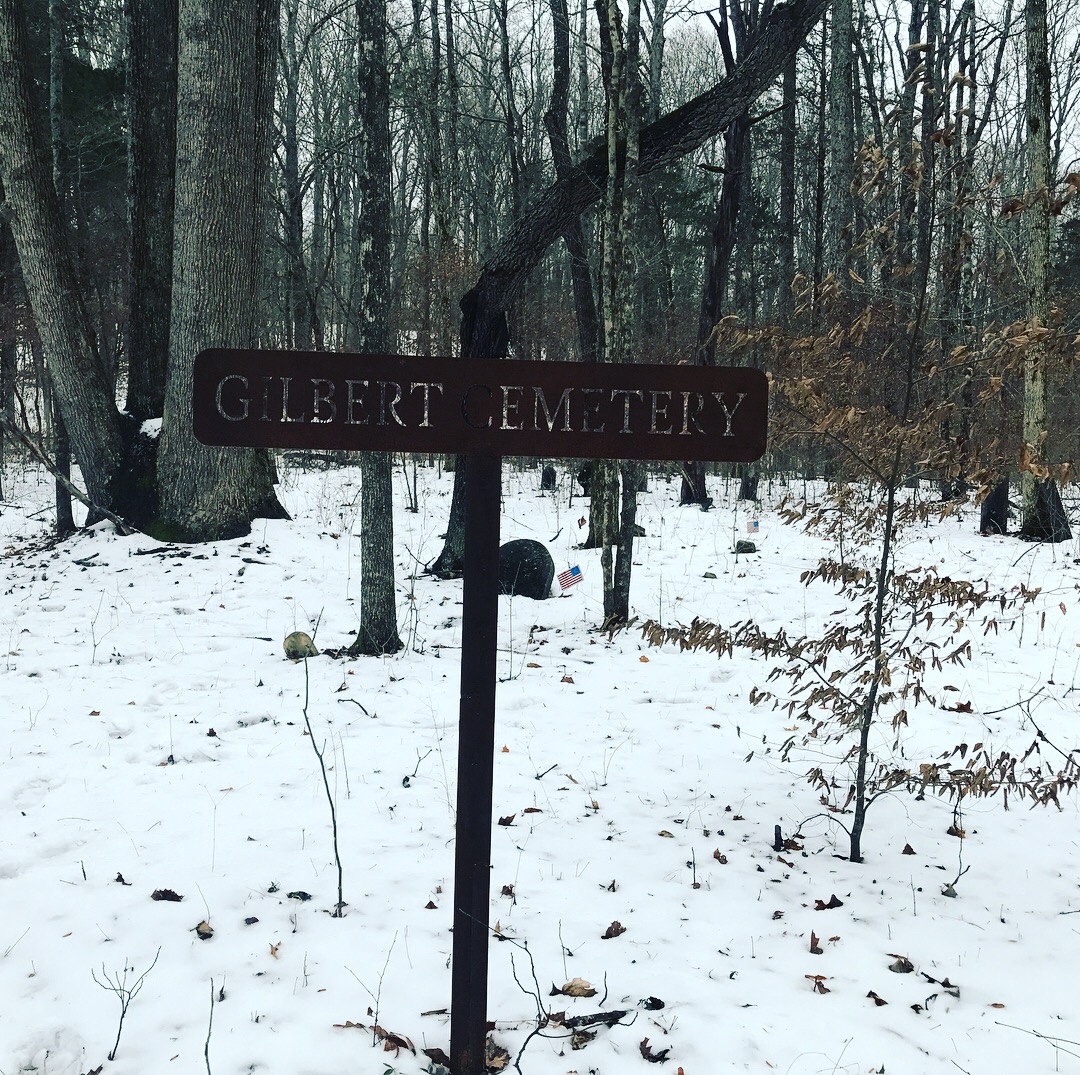 On Memorial Day of last year, I hiked through some pretty tough mud, falling multiple times and getting filthy in the process. But I was on an important mission. I brought American Flags with me to be placed on headstones of Gilbert Cemetery located deep within the Shawnee National Forest. There are no roads to this cemetery, just a faint trail with very little tree markings to guide you to the site. But I accomplished my mission that day and treated those in the cemetery, who had passed in the 1800s with their own American Flag to continue in their resting place as the true Americans that they are. No one probably comes to see them anymore, I felt like my mission was the right thing to do. And the flags are still there!

So to end this blog, I have to say that it was probably my best winter hiking trip thus far. I enjoy hanging out with Two Bobs Adventures and I really loved the sights we got to see down there. The Shawnee National Forest is awesome, in all seasons, all the time and seeing these sights makes me and motivates me to continue doing these videos!

Check out Hiking with Shawn’s Video of Indian Kitchen Below!

Check out Two Bobs Adventure’s Video of Indian Kitchen Below!

“Shawnee National Forest is one of the smallest forests in the United States, yet it is so big to us in southern Illinois. It’s ours to enjoy, so let’s enjoy it!” -Shawn J. Gossman